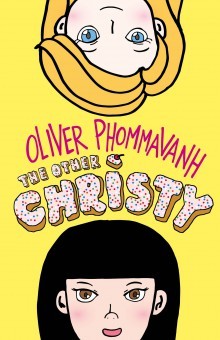 Oliver Phommavanh has just released a new novel for kids “The Other Christy” and I had the privilege of reading an Advanced Review Copy and interviewing Oliver for our blog – he’s awesome btw – before we get to the interview, here’s some light on “The Other Christy”. Highly recommended to a younger reading audience aged 8-12 years old, I still enjoyed this book as an adult. Christy Ung, a quiet, reserved girl has always been known as “The Other Christy” while being in the same class as the “loud-mouthed” Christie Owens – the most popular girl in school.

Christy Ung migrated to Australia from Cambodia and struggles with daily life as she is still a loner at school. Adjusting to Aussie life is hard enough especially when living with her traditional and clean freak Grandpa however with the help of her Aunt Mayly, Christy soon discovers when baking a cake to share with her class on her birthday, you can exhibit a positive charge to win in a negative field when you feel the world is against you. A cute, heart warming and funny read that is suitable and recommended for a younger audience. A great story about a girl called Christy – the other Christy as there are 2 in her class. A story of friendship and great lessons – highly recommended as a light hearted fun filled read that I rated 5 stars!!! Thankyou Penguin Random House Publishers for sending me an Advanced Review Copy in exchange for my review.

The top 10: This or That
Ice cream or Ice Block? Ice cream for sure.
Library or Bookstore? Library because I can write in there
Chicken or Beef? Chicken for the variety
Winter or Summer? Winter because I love snuggling up at night
Tea or Coffee? Tea. I don’t drink coffee
Bungee Jump or Sky Dive? Haha, I’m scared of heights. I suppose sky dive because at least I have a parachute.
Favourite Colour: Purple
Ultimate Holiday Destination: America.
Famous last words: Whatever man, I’m just doing this for the lols.

Review and Interview by Annie