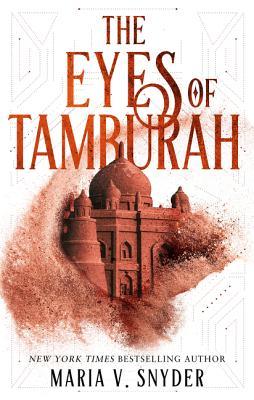 Shyla is a researcher who resides in Zirdai, an underground desert city ruled by the wealthy Water Prince and brutal Heliacal Priestess. Everyone lives below ground as the sun is too fierce above. Although Shyla is sun-kissed (an outcast and considered cursed by the Sun Goddess) she is still renowned for uncovering innumerable archaic facts, lost artifacts, ancient maps, and obscure historical documents. Her quiet life is about to change when Banqui, an archaeologist, enlists her services to find The Eyes of Tamburah: legendary gemstones that bestows great magic to its wielder. These ancient objects can tip the balance of power and give whoever possesses them complete control of the city. Chaos erupts when The Eyes are stolen soon after they’re found and Shyla is blamed for the theft. Forced to flee, with the Prince’s soldiers and the Priestess’ deacons on her trail, Shyla must recover the jewels and clear her name. A quest that will unearth secrets even more valuable than The Eyes of Tamburah themselves.

I have been a fan of Maria’s work for some time. All of her books are great but I have to admit, The Eyes of Tamburah is now a personal favourite. I guess this is due to personal taste in the books I love to read. The setting of this book reminded me of an amazing TV documentary called “Cities of the Underworld”, a show that takes us on a journey back in time to the ancient cities in the Middle East and the Cradle of Civilisation that have since been built up over time. I loved how the characters lived below ground as the sun was too incredibly hot and they have to travel up and down levels to simply move around. What made it interesting is different levels proved to be treacherous for various reasons. I enjoyed Shyla as a character, her job was mesmerising being able to read maps and ancient scrolls as a job but I loved her undying loyalty to her friend that was her motivation to set out on a dangerous journey to retrieve the stolen eyes of Tamburah. Her endurance and her strength made her a likeable character in my view. Her connections between Rendor and Banqui were also very interesting.

The flow of the story was fantastic as the world building and new terminology was easy to learn through the constant dialogue between the characters. Personally I like books that have a lot of dialogue more than descriptions. Makes the story and characters really come to life in my mind. Some of the scenes in this book reminded me of Indiana Jones and the Temple of Doom which made it even more exciting to read. This book really stands out from the other series I have read. As I adore books that have an easy flow to read with an have an Arabian desert feel to it, this book has earned a special place with my book loves of 2019.

With special thanks to Harlequin Teen Publishers for sending me an Advanced Review Copy of this book.
-Annie

2 thoughts on “The Eyes of Tamburah by Maria V. Snyder”